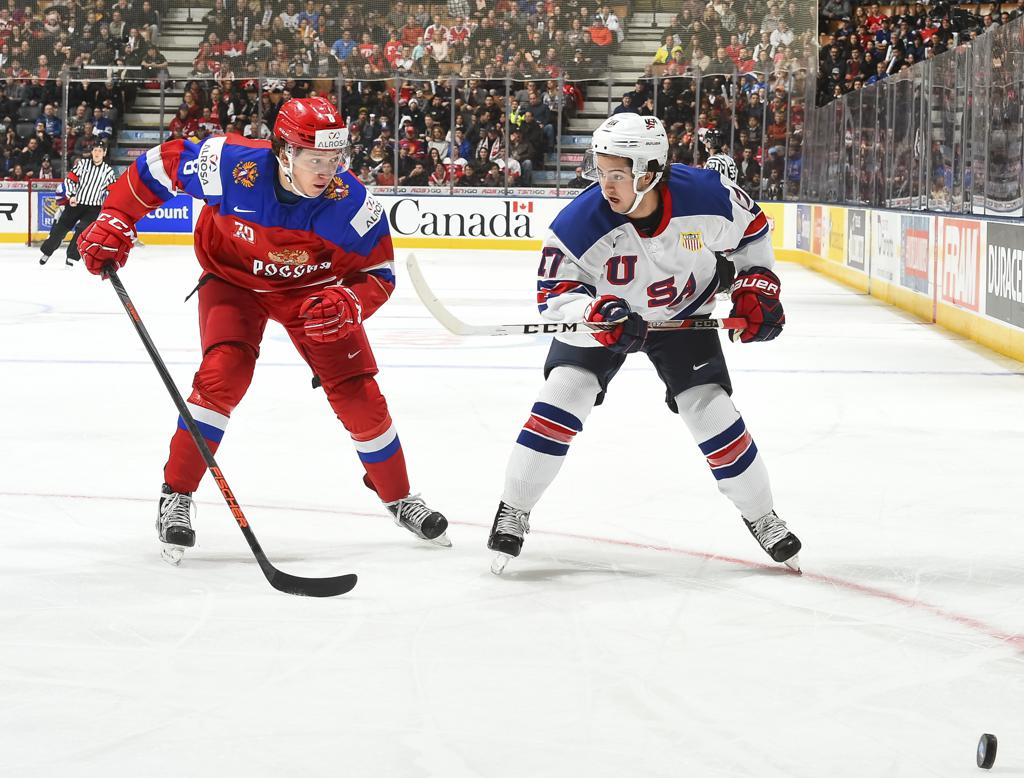 The U.S. came out a-blazin’ but Russia slowly worked its way into the game. In the end, the U.S. played a perfect third period. Next up, New Year’s Eve!

The win puts the U.S. in first place in the group, but an expected Canada win tonight against Latvia will give both teams nine points leading up to their clash on New Year’s Eve.

“It’s going to be a great game,” said Clayton Keller, one of the scorers this afternoon. “It’s not something you get to experience too often, so we’re looking forward to it.”

The Russians are now 1-2, but their three points will almost certainly be enough to get to the quarter finals as both Latvia and Slovakia have no points yet.

The Americans got goals from three players today, once again spreading the scoring.

“We showed a lot of heart today and did a great job shutting them down in the third,” Keller added. “All lines can score and have skill, but our best is yet to come. We’re on the right track.”

Despite coming out lights out and outshooting the Russians 18-6 in the first period, the U.S. left the ice after 20 minutes in a 1-1 tie.

The Americans got the opening goal at 4:14 on a crazy-good play by Keller to the side of the goal. He got the puck, faked goalie Ilya Samsonov and a defencemen into next week, and tucked the puck into the open net. That was a goalscorer’s goal, to be sure.

“Casey Fitzgerald took the puck down the wall and threw it across to me,” Keller described. “I just tried to make a move, and I was lucky enough to beat him.”

Keller and linemate Colin White were effective all afternoon, seemingly knowing each other’s every move. “We have great chemistry,” Keller agreed. “We played on the same line two years ago at the under-18s. We’re both fast and Joey Anderson fits well on our line as well.”

But despite incredible territorial advantage and puck possession—not to mention the only three power plays—they couldn’t add to the lead. In fact, the Russians tied the game with the second short-handed goal of the tournament (Sweden has the other).

Sergei Zborovski got a loose puck in centre ice and made a nice clearing into the U.S. zone where Yakov Trenin chased it down. He lobbed a pass in front where Kirill Urakov batted it in at 11:59.

“We talked about not getting frustrated,” Troy Terry said of the mood in the dressing room after 20 minutes. “We didn’t want to take any shortcuts offensively. We knew we’d get our chances.”

The U.S. kept skating and went ahead at 4:03 of the second. Charlie McAvoy’s quick shot from the point was bobbled by Samsonov and Colin White knocked in the rebound.

Midway through they went up by two goals on a nifty pass from behind the red line by Erik Foley. It was beautifully tipped at the near post by Terry at 11:41 for a 3-1 lead.

“I was calling for the puck,” Terry said. “I knew I had a bad angle, so I just tried to direct it on net. I got a little lucky, but I’ll take it.”

Just when it seemed the Americans had taken control of the game, they took their first two penalties, and the Russians pounced on the second. Yegor Rykov waited at the point before shooting, and his high wrister was tipped in front by Kirill Kaprizov to bring the Russians to within a goal. They dominated the rest of the period.

The Americans settled down and played a near flawless third, though. The only glitch was a penalty to Erik Foley, but the Russians, despite some great chances, couldn’t count the equalizer.

“We’re really starting to come together,” Terry said. “We know what kind of a team we are, and when we play like we did today, we can be successful.”