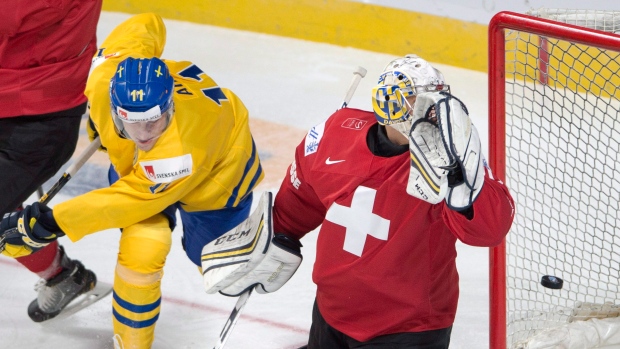 “I’m playing with good players,” said Eriksson Ek.”They set me up and I just try to shoot. Today I was lucky and two went in.”

Lias Andersson and Lucas Carlsson also scored for Sweden, and Grundstrom and Alexander Nylander had two assists apiece. Jonas Siegenthaler notched a goal and an assist for Switzerland, and Calvin Thurkauf had the other goal.

Van Pottelberghe did his best to keep his team’s hopes alive as Sweden outshot Switzerland 46-15. In Switzerland’s opening 4-3 overtime win versus the Czechs, he faced 39 shots.

“It’s a great booster when we know we have a guy in the back that can make saves when we need them,” said Thurkauf. “Joren has been astonishing over the last two games. We hope we can count on that for the rest of the tournament.”

The Swedes, who sit first in Group A, face winless Nordic rival Finland on Thursday. Switzerland battles Denmark in a crucial matchup on Friday.

Last year, the Finns edged Sweden 2-1 in the semi-finals en route to gold in Helsinki. So there’s a grudge match coming up.

“I think it’s going to be a good battle,” said Nylander. “They’ve lost two, so they’ll be coming at us hard. But we are mad from last year, so we’ll be on top of our game too, I think.”

This game was tied 2-2 heading into the third period, and Swiss fans prayed their team could emulate Denmark’s 3-2 upset over Finland the night before. Alas, it was not to be.

“For sure we’re proud that we played a pretty good game,” said Thurkauf. “But in the end, we lost a very important game that we should have won, or at least gotten one or two points out of it.”

Sweden struck early. On a Nylander set-up, Eriksson Ek fooled van Pottelberge with his quick release from the edge of the left faceoff circle at 4:13.

The blue-and-yellow boys looked unfazed. Grundstrom burst down the left side and dished it to Andersson, who corraled the puck and snapped a shot high glove side for a 2-1 lead at 6:38. It was the first World Junior goal for the 18-year-old HV71 forward, who had nine points for Sweden’s silver-medal U18 team in April.

Sandstrom slid across to make a nice save on Damien Riat’s late-period one-timer. He wasn’t busy overall, as Sweden outshot the Swiss 15-6 in the opening frame.

However, Switzerland valiantly persevered in the second period, tying it up at 6:17. It took just 21 seconds to cash in on the power play. Hischier fed Thurkauf down low, and the Swiss captain slammed in a wrap-around for his second of the tournament.

The Swedes kept firing away, but couldn’t convert. With just over three minutes left in the middle frame, van Pottelberge made a sharp glove save on Oliver Kylington, who cut to the net with a quick backhand.

“We had a lot of shots, but the goalie was playing good,” said Eriksson Ek. “We need to be in front and not allow him to see the puck.”

The Swiss called their time-out to strategize before a power play early in the third period, but it proved ineffective.

After Eriksson Ek’s go-ahead goal, Lucas Carlsson gave Sweden some insurance, scoring on a high shot with 2:49 left. It was deserved, as shots favored Sweden 17-4 in the third.

“We played a little bit complicated in some of the areas,” said Nylander. “We need to keep it more simple and we’ll do better. But they had a good game. They played good too. It was nice to get the win.”

Highly touted 16-year-old Swedish blueliner Rasmus Dahlin didn’t crack the scoresheet in this game, but impressed again with his skating, positioning and playmaking. He had two points in the opening 6-1 win over Denmark, a Swedish World Junior record for a player his age.

It was Sweden’s eighth straight win over Switzerland at the World Juniors. The last Swiss victory over Sweden was on 3 January, 2003, 5-3 in relegation play.

In 2010, Sweden trounced Switzerland 11-4 in the bronze medal game, the largest margin of victory ever in a World Junior medal game.