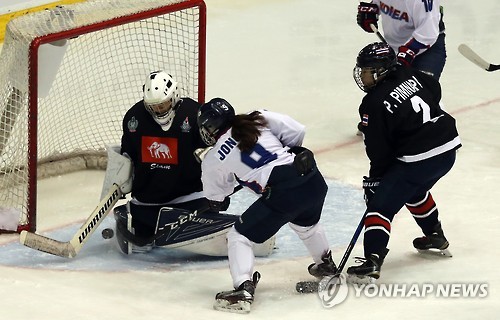 Park Jong-ah of South Korea (C) scores against Thailand in the women’s
hockey tournament at the Asian Winter Games at Tsukisamu Gymnasium
in Sapporo, Japan, on Feb. 18, 2017. (Yonhap)

South Korea notched a historic women’s hockey victory with a 20-0 rout over Thailand at the Asian Winter Games here Saturday.

Captain Park Jong-ah scored South Korea’s first three goals as part of her five-goal game at Tsukisamu Gymnasium, giving the country its first-ever victory at the Asian Winter Games on its 16th try.

Park, a top-line forward, nearly matched that previous goal total by herself in the first period. She scored a power-play goal just 3:36 into the first period and completed a natural hat trick at 8:20.

It was much the same story in the third period. South Korea got three goals from three different players in the first three minutes of the final frame, as Kim Hee-won, Lee Yeon-jeong and Jung Si-yun got in on the act.

The Thai players could barely skate with the South Koreans, and recorded zero shot on goal in the opening 20 minutes, as the puck mostly stayed in the Thai zone. South Korea ended up outshooting Thailand 108-1.

In addition to her five goals, Park Jong-ah added two assists. Han scored one and set up four others in the blowout. Jo and Kim each scored twice, and 16 players recorded at least a point.

“It wasn’t just myself doing the work,” Park said afterward. “We were able to score these goals because we all worked hard together.”

South Korea head coach Sarah Murray said it was “nice to get the nerves out of the way” and the victory was a good way to start the tournament.

“We had practice with pressure and practice the strategies and systems that we wanted to play,” she said. “It was good to get some extra practice on things we needed to work on.”

The Winter Asiad’s opening ceremony is Sunday, but the women’s hockey games began Saturday to accommodate the teams’ tight schedules. Six nations will each play five matches in a round robin format, with the top three teams taking home the medals next Saturday.

South Korea’s next game is against Japan on Monday, followed by Kazakhstan on Tuesday, China on Thursday and Hong Kong next Saturday.

Japan, which recently qualified for an Olympic spot, is the highest-ranked team here at No. 7, followed by China (No. 16), Kazakhstan (No. 18) and South Korea (No. 23). Hong Kong is 35th, but Thailand isn’t ranked.

Out from the cold, Singapore men’s ice hockey team target success in 2017

Host Japan off to winning start at Asian Winter Games