Russia Cruises to Semi-Finals After Big Win Over Norway

February 21, 2018 / NationalTeamsOfIceHockey / Comments Off on Russia Cruises to Semi-Finals After Big Win Over Norway 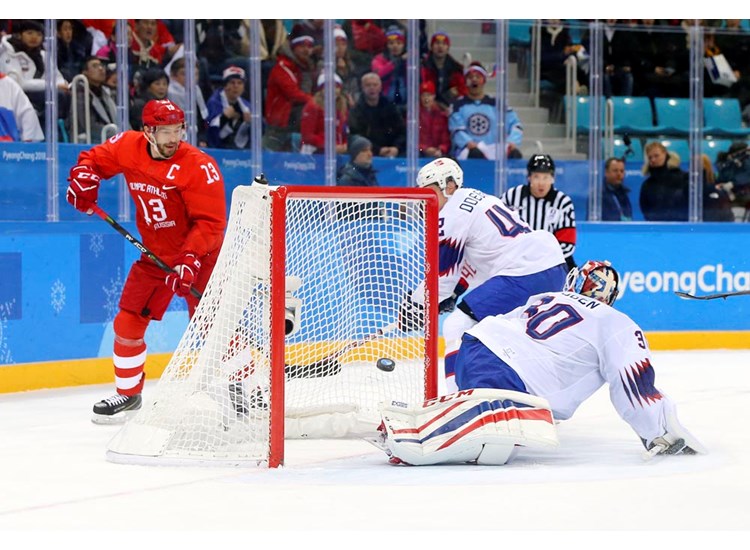 The first semi-final matchup for Friday has been confirmed after Russia defeated Norway by a score of 6-1 on Wednesday afternoon in PyeongChang, South Korea.

Russia was dominant from start to finish, taking a 19-2 shot advantage and a 3-0 lead into the first intermission alone. It all started when, at 8:54, former NHL top prospect Mikhail Grigorenko scored off of a lucky bounce, beating out a few Norweigan players before sending a wild wrist shot over Lars Haugen, giving the Russians the early 1-0 lead.

At 13:25, some great passing between Sergei Mozyakin and Pavel Datsyuk resulted in Russia’s second marker. This time, Nikita Gusev would score his first goal of the tournament on the power play after Mozyakin’s shot from far out went off the boards and right to Gusev. Gusev, property of the Vegas Golden Knights, scored from a tough angle, just squeaking it pats Haugen to make it 2-0.

Just before the end of the period, Russia scored again. This time, Slava Voynov made it 3-0 after some beautiful passes from Gusev and Kirill Kaprizov found its way to Voynov in the high slot. Voynov made no mistake with a perfectly-placed wrist shot to end the period and the night for Haugen, one of the top goaltenders of the tournament.

Norway was hoping to at least get one on the board, and that’s what they did at 7:21 in the second. Alexander Bonsaksen would make it 3-1 after his shot completely fooled Russian goalie Vasili Koshechkin, who was looking the wrong way on the shot.

But Russia quickly scored a pair of goals to make it 5-1. At 8:35 on the power play, an Ilya Kovalchuk feed to Sergei Kalinin in front resulted in Kalinin’s first goal of the tournament, only to have Nikita Nesterov score another power play goal at 13:06. Ivan Telegin would score one late in the third period to complete the game, giving the Russians the 6- victory on Wednesday evening.

Russia will turn their focus to the semi-finals on Friday, where they hope to secure their first championship game appearance since 1998 in Nagano, Japan. They’ll take on the Czech Republic at 16:40 local time, a rematch of the gold medal game 20 years ago.

Czechs Perfect in Shootouts After Win Against USA