February 17, 2018 / NationalTeamsOfIceHockey / Comments Off on Russia Blanks Americans to Win Group B 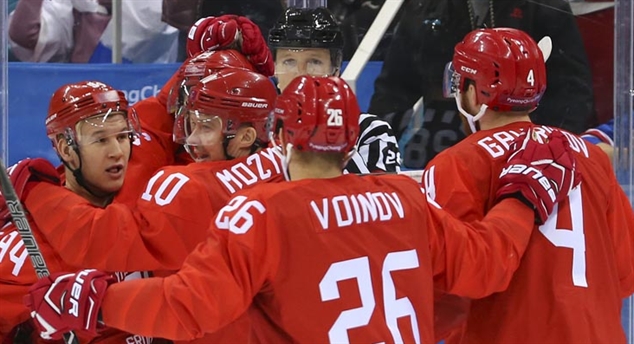 Russia has finished Group B action with a big 4-0 victory over the United States, changing their focus to the quarter-finals later next week.

It didn’t even take half a period for the Russians to score the game’s first goal. At 7:21, Nikolai Prokhorkin made it 1-0 after a great tic-tac-toe passing play between Sergei Mozyakin and Alexander Barabonov landed on Prokhorkin’s stick, with #74 scoring his first Olympic goal to put Russia ahead in the highly-anticipated contest.

The Russians were showing why they were considered the top team in the tournament heading in with a great start to the second period. With his team dominating puck control, At 22:14, Prokhorkin got his second of the game after taking a nice pass from Sergei Shirokov in the neutral zone before sending a hard wrist shot over Ryan Zapolski’s glove and in to make it 2-0 for the team in red.

A goal with just 0.2 seconds left in the middle period proved to be a crushing blow to the United States. Sergei Andronov would do a great job along the boards, keeping the play alive despite having Americans all over him. He’d find Ilya Kovalchuk in the high slot, and the former NHL star did what he does best by sending a laser beam past Zapolski, giving Russia the three-goal advantage heading into the third period.

Things, unfortunately, didn’t start off much better in the second for the Americans. Not even 30 seconds into the period, two American defenders collided in the neutral zone, allowing Kovalchuk to skate in with the puck. Just like he did against Slovenia, Kovalchuk found the back of the net for the second to make it 4-0 Russia, a lead that took any potential momentum the Americans were looking to get out of the question.

With the win, Russia has taken first place in Group B, earning them a bye to the quarter-finals on Wednesday.

Surprising Slovenians Finish Second in Group B With Win Over Slovakia