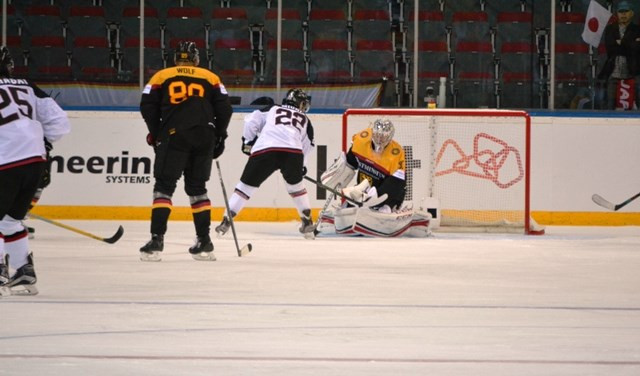 The Japanese are not the favourite here but didn’t come to Riga to be a pushover. In the first game against Germany that was easier said than done though in a clash between two countries that are separated by 11 places in the World Ranking. Having seven NHL players on the German roster didn’t make it easier for the Asians either.

“They have a lot of skill, it was very hard,” said Yuki Miura, “but we didn’t give up.”

The Germans needed less than four minutes to open the scoring. Brooks Macek capitalized in front of the net after a diagonal pass to the crease from Leon Draisaitl at 3:26.

With 2:38 left in the period and Takeshi Saito in the penalty box, Patrick Hager sent a shot from the face-off circle after a drop pass from Tobias Rieder. Florian Schutz screened Japanese goalie Yutaka Fukufuji and deflected the puck but didn’t interfere the goalie in the crease as the video review showed. It was one of two goals for him.

“It’s never easy to win a game despite them probably not playing at the same level like us in European leagues. But they can play too and made it difficult at the beginning. After the first goals it became easier for us,” Schutz said.

Germany scored three of the five goals on power plays and outshot Japan 51-13. Early in the middle frame Tobias Rieder added another marker after a horizontal pass from Leon Draisaitl to make it 3-0 for the black-and-yellow team. With the next power play Tom Kuhnhackl increased it to a four-goal lead. Schutz followed suit on a rebound during the next man advantage for the Germans forcing Japan head coach Greg Thomson to use his time-out. For the last period he replaced Fukufuji with Takuto Onoda in the net.

For the Germans the high-score game was a good opportunity to gel together with the new players on the team.

“Most of the NHL players were already with us at the World Championship except for two who are new but we know each other and it’s great for German hockey they can play here with us,” Schutz said. “It’s noticeable that they’re playing at the highest level.”

The Germans will continue tomorrow against Austria and on Sunday against host Latvia. Last time in the Olympic Qualification Austria succeeded against Germany to qualify for Sochi 2014.

“The score [against Japan] has no meaning for the next games. Austria is at par with us, we didn’t succeed against them last time. It will be the two most important games of the year for us. We feel great and have self-confidence,” said Schutz.

Out skated, out shot, outscored

It was an unusually high score considering that Latvia needed overtime to beat Austria at their last World Championship game in 2015 and even lost 6-3 in 2013.

Seven different scorers netted the puck for Latvia led by Kaspars Daugavins with two goals and an assist.

“The score didn’t show the real game. They’re a way better team. They played hard at the start and we were lucky when we needed to get lucky to score the third and fourth goal, which changed the game, after that it was just like pond hockey going back and forth,” summarized Daugavins.

It was not like the Austrians were without chances in Riga. The hosts allowed them to come into the game in the beginning and were hospitable enough to play Austrian folk music during one or the other game stoppage. A strong Kristers Gudlevskis with 22 saves in the net prevented the Austrians from taking the lead in the first period while the Latvians widened the gap with six unanswered goals in the second and third period.

“20 minutes is not enough. We were pretty okay in the first period, we were in the game, we actually had more shots than Latvia in the first period but then we didn’t come up anymore and Latvia played well defensively. Our game broke down badly,” Austria head coach Alpo Suhonen analyzed.

“We had two goalies here who are both backup goalies on their club teams but we hope they are developing. We need a couple of more goalies. They didn’t play bad but one or the other goal could have been prevented.”

It was a game the Austrians could have needed their best goalie Bernhard Starkbaum, who didn’t travel to Riga after becoming father. The Austrians started into the game wanting more. They had more puck possession in the beginning of the game but it was the hosts who opened the scoring on a Daugavins shot at 5:41.

In the following minutes the Austrians had two power plays and some scoring chances but no luck in front of Gudlevskis’ net. They didn’t score and even conceded a shorthanded goal. Lauris Darzins left for a breakaway. He lost the puck against a defender in the offensive zone but Andris Dzerins got it and beat Austrian goalie David Kickert top-shelf.

With 3:21 left Thomas Hundertpfund brought Austria onto the scoreboard and new hope, which was destroyed in the second period.

After a face-off won by Zemgus Girgensons, Roberts Bukarts sent off a shot top-right to restore the two-goal lead. Captain Daugavins even made it 4-1 after accepting a horizontal pass in the middle of the offensive zone to beat Kickert just two-and-a-half minutes after the last marker.

With 2:22 left Kristaps Sotnieks missed on a breakaway when coming out from the penalty box but one minute later Ronalds Kenins concluded a 2-on-1 with the 5-1 goal before the second intermission.

Austria changed goaltenders for the third period but to no avail as the scoring didn’t end there. At 3:57 Miks Indrasis shoveled the puck on the left side around David Madlener while falling to make it a five-goal gap. Martins Dzierkals added another marker with his shot from close to the net just two minutes later and in the dying minutes of the game Rodrigo Abols used his chance to land on the scoreboard too after a fast attack for the final score of 8-1.

With the result Austria reduced its chances of returning to the Olympics to virtually zero while the Latvians are full of hope before tomorrow’s game with Japan.

“We have a short time to rest against Japan. We need good sleep tonight, good food, come out tomorrow and play our best to improve a little bit every game because we know the key game will be in three days,” Daugavins said. “[Germany] is the best team here right now on paper so we know they’re really good and have a lot of NHL player but we’re going to give them a battle, that’s for sure.”