Being the first person of your origin to do something is always a difficult feat. After being founded in 1917, with over 30 different clubs and millions of viewers, the National Hockey League is one of the most prominent sports leagues across the world. However, despite this immense popularity, the NHL has never had a player from Australian origin. Playing hockey since his childhood, Nathan Walker wanted to change that.

Born in 1994 in Cardiff, Great Britain, Nathan Walker developed a fondness for the ice court at a young age. At only 5’8” and weighing in at 176 lbs, despite his diminutive size compared to many future NHL players, Walker started his career dominating other youth in U-14 & U-16 leagues in Australia. By outperforming much of his local competition, Walker made a name for himself and garnered interest from foreign teams.

This reputation led to Walker’s coach acquiring a tryout from a Czech Republic team named HC Vitkovice. Following successful tryouts, Walker dominated in the organization’s U-18 team and was later given the ability to play for the U-20 team as he grew. Walker’s early success in Europe continued when he played in the 2011 Spengler Cup and 2011-12 Czech Extraliga season with the senior version of his club, HC Vitkovice. After Averaging over four goals, five assists, and nine points in the season, Walkers great play developed significant interest from organizations in the NHL and propelled him towards he is now. 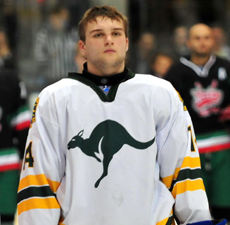 Even after playing in Europe for six years, Walker’s path to the NHL was not as clear cut as it should have been. Initially signing with the Youngstown Phantoms, a US Ice Hockey Junior League team, Walker continued to demonstrate his excellence in the ring by recording 27 points in the 29 games that he played during the season. However, despite putting up great numbers in the regular season games he played, a neck injury resulted in Walker missing out on the postseason.

Following spending his off time recovering from his injury and training in the Czech Republic. Walker was invited to the Washington Capitals training camp. Looking to realize his draft dreams, Walker managed to be sufficient in his performance and avoid being cut from camp. However, despite being wanted by the team, a lingering NHL rule prevented the Capitals signing Walker due to his play overseas in Europe a year prior. This rule meant that Walker had to wait out another year for the 2014 NHL Draft before being allowed to play for any team.

Spending his time with the Capitals D-League while waiting for the 2014 draft, Walker became the first Australian player to play for an NHL D league team. During the season with the team Walker also recorded his first point before being chosen by the Capitals in the 2014 draft with the 89th pick. Walker then signed a three-year deal and had become the first Australian player in the NHL.

Nathan Walker’s rise from a promising local star into an NHL talent provides hope to many players regardless of their sport. After being thousands of miles away, Walker showed that he was never afraid of achieving his dreams. His success is very significant not only to Australians hoping to have a career in the NHL but children around the world who want to accomplish their goals. Nathan Walker, the first Australian professional hockey player of all time provides hope to potential sportspeople everywhere.