May 21, 2017 / NationalTeamsOfIceHockey / Comments Off on IIHF adds eight to Hall 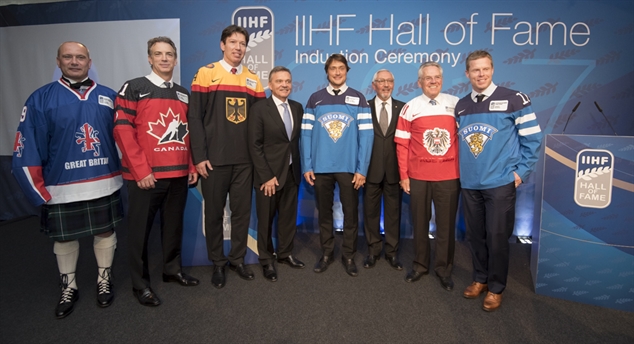 The event, hosted by international hockey broadcaster Gord Miller, inducted eight members whose contributions to the sport have helped transform the game as they have served as hockey ambassadors for their respective countries. The IIHF Hall of Fame opened in 1997 to celebrate a century of the game being played. Inductees have included some of the biggest names and international contributors to the sport.

Saku Koivu won eight medals on the international stage, including leading Finland to its first ever World Championship gold in 1995. Koivu would play for the Montreal Canadiens and, later, the Anaheim Ducks. He would become the first European captain of the Canadiens. Koivu is also known for his courage off the ice. He battled Non-Hodgkin’s lymphoma that kept him out for almost an entire season, including the 2002 Olympics.

“It seems like I’ve come full circle coming back to Germany and being honoured for my career,” Koivu said, reflecting that he made his senior men’s debut with the Finnish national team at the 1993 World Championship in Germany.

Angela Ruggiero was a world-class defenceman and competitor for Team USA. Her contributions in hockey continue to this day as she continues to break down barriers. She earned four Women’s World Championship gold medals and gold at the 1998 Olympics. In 2015, Ruggiero was inducted into the Hockey Hall of Fame. Ruggiero could not make the event when her father Bill passed away suddenly but her brother Billy was on hand to accept the honour and pay tribute to his sister.

Dieter Kalt was a star player in the 1960s in the Austrian league and has been the face of Austrian hockey for half a century. He represented Austrian at the 1962 World Championships in Colorado Springs and in every major IIHF event from 1962-1972.

After retirement, Kalt was a referee and coach and then President of the Austrian Ice Hockey Federation from 1996-2016.

“This is an honor and I accept this for all that we have done for the development of our federation. We organized world championships and Olympic qualification games. We did this because we had big support from the IIHF, president, council, and delegates.”

Joe Sakic had an illustrious career with the Quebec Nordiques and then the Colorado Avalanche when the team moved to the United States. He captained the Avalanche for 17 years making him one of the longest serving captains in NHL history. Sakic is also the NHL’s all-time leader in playoff overtime goals. Winning World Championship and Olympic gold, along with the Stanley Cup, Sakic is a member of the prestigious triple gold club.

“It was always very humbling playing for your country,” Sakic said. “To be able to play in the World Championships, Olympics, World Cup, there is nothing like it. I am very fortunate for my teammates. I’ve had the good fortune to play with some of the best to play the game and learn from them.”

The Richard “Bibi” Torriani award was presented to Tony Hand, the greatest player in Great Britain’s modern hockey history. The Edmonton Oilers selected Hand 252nd overall in the 1986 draft, the first British player ever taken. When Hand attended training camp, Edmonton general manager Glen Sather announced that the Scottish Wayne Gretzky would try out for the team, which some might have led to think that a player who trained and played in Great Britain would be a curiosity.

“Turns out he was more than just a curiosity; he was a terrific player there and everywhere he played,” Miller said. “It is fair to say that very few players were better longer than Tony Hand.”

Hailing from Edinburgh, Scotland, Hand played professional hockey in the BHL as a 14-year-old and finally in the English Premier Ice Hockey League at the age of 47.

Teemu Selanne said today’s honour means so much because as a boy, his hope was to play in the top league in Finland and, maybe if things went well, the national team. The NHL was not a thought at the time. Selanne, known as the Finnish Flash, scored 684 goals in 21 NHL seasons and won the Stanley Cup in 2007 and silver medals at the World Championships in 1999 and Olympics in 2006.

Finally, Cologne’s own Uwe Krupp gave an emotional presentation about receiving this honour in his hometown. First noticed by Scotty Bowman, Krupp was drafted by the Buffalo Sabres and would go on to an NHL career that spanned 14 seasons with honours that included being the first German to score a Cup-winning goal and the first German player to win the Stanley Cup.

“I am privileged and fortunate to know so many people who were able to take this awkward kid from Cologne, Germany, the first German to come to North America to help him on his way and help him learn to play hockey in the best league in the world.”

He spoke fondly of Franz Reindl and how he was an important person in his career and the next step in his career that has included coaching the German junior and senior teams.