February 20, 2018 / NationalTeamsOfIceHockey / Comments Off on Germany Stops Swiss in Overtime to Advance 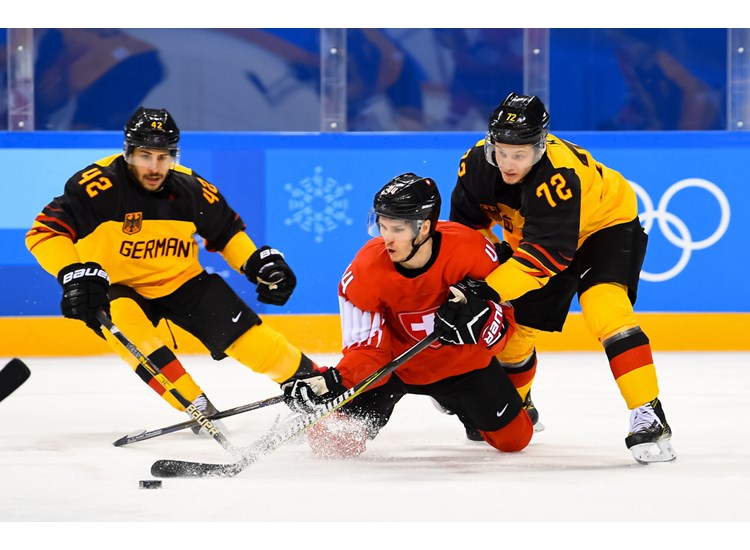 Germany is off to the quarter-finals after beating their Swiss rivals 2-1 in overtime on Tuesday.

Switzerland found themselves down early in the game after Cody Almond was ejected from the contest for a hit to the head. As punishment, Germany scored a minute later on the power play when Leonhard Pfoderl one-timed a feed from Frank Hordler, blowing a slap shot past Jonas Hiller and in to make it 1-0 for the Germans.

It continued to stay a physical game after that, but Simon Moser’s goal at 23:40 came while both teams were at even strength. A great effort by the Swiss forwards to keep the puck active below the goal line eventually resulted in Moser tapping in the puck in the empty cage, with a bit of help of a German defender who knocked down his own goalie before Switzerland tied the game up at one.

The low-scoring affair would require overtime to decide, but it didn’t take much of the extra frame. Yannic Seidenberg would pick up the rebound with 26 seconds complete in overtime, giving Germany the win and sending Switzerland home early.

With the win, Germany will battle against Sweden at 21:10 local time on Wednesday, with hopes of making a surprise run to the Olympic semi-finals on the line.

Czechs Perfect in Shootouts After Win Against USA