February 23, 2018 / NationalTeamsOfIceHockey / Comments Off on Germany to Play for First Olympic Gold Medal After Stunning Canada 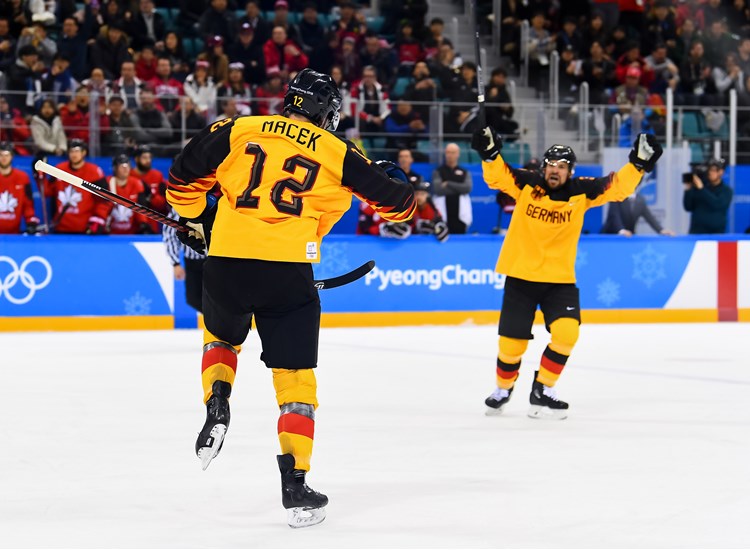 After not even making the Olympics back in 2014, Germany will play for their first-ever gold medal after beating two-time defending champions Canada 4-3 in a thrilling semifinal game on Friday.

The win means Germany will play Russia on Sunday for the championship, besting their third-place finish back from 1932, and West Germany’s same result from 1976. The win is Germany’s first since 1996 in a major tournament, a big difference from their 8-2 loss to Canada with NHLers back in 2010.

The biggest storyline heading into the game was that Canada would not be able to use Ben Scrivens after a shoulder injury that took him out of the game against Finland sidelined him for Friday. Canada’s starting goalie for the entire tournament would be replaced by Kevin Poulin, who, after leading his country to the Spengler Cup championship in December, hadn’t allowed a goal in four per-tournament and Olympic contests, including five shutout periods against Korea and Finland.

But his tournament shutout streak would end at 14:43 in the opening period. With two Canadians in the box, Brooks Macek made it 1-0 Germany after taking Dominik Kahun’s pass and using David Wolf as a screen in front of the net, beating Poulin on the wrist shot to give Germany the advantage.

Five minutes into the second period, Canada found themselves playing some of their worst hockey of the tournament and trailing the Germans 2-0. This time, Matthias Plachta scored on a transition play after taking a feed from Patrick Hager, beating Poulin with the wrist shot to put Canada in a dangerous spot.

If Canada thought things couldn’t get worse, they did. At 6:04, Frank Mauer converted on a great pass from Marcel Goc, taking any wind that Canada had in their sails to make it 3-0, a lead that looked to be too much for Canada.

Or so they thought. Two minutes later on the power-play, Gilbert Brule made it 3-1 after unleashing a hard one-timer past Danny Aus den Birken, giving Canada some hope after the worst start to a game they’ve had in Pyeongchang.

But Germany wasn’t about to let Canada put themselves back in the game. At 12:31, Patrick Hager would get credit for re-directing a shot from Matthias Plachta just three seconds into a power-play opportunity, giving Germany their three-goal advantage back and putting Canada in a tough position heading into the third.

Canada needed a goal to kick off the third period to give them any hope, and with 2:42 done in the period, Mat Robinson scored Canada’s second goal. Robinson would use his speed to break into the German zone before taking a pass from Christian Thomas. Robinson would proceed to use his extra space to cut towards the net and backhand the puck over Aus den Birken, cutting the lead back to two goals.

One of Canada’s best players of the tournament was Derek Roy, but heading into the third period, he had still yet to find the back of the net. That all changed at 49:42 on the power play when Chris Lee made a nice move around a defenceman before setting up Roy for his second point of the night. Roy would bounce the puck off a skate in front of the net, beating Aus den Birken to make it 4-3, giving Canada all the momentum in a tight game. It wouldn’t do enough to change the course of action for Canada, who would lose a stunning 4-3 game to Germany to put them in the bronze medal game.