February 20, 2018 / NationalTeamsOfIceHockey / Comments Off on Finns Flatten Korean Comeback to Advance to Quarter-Finals 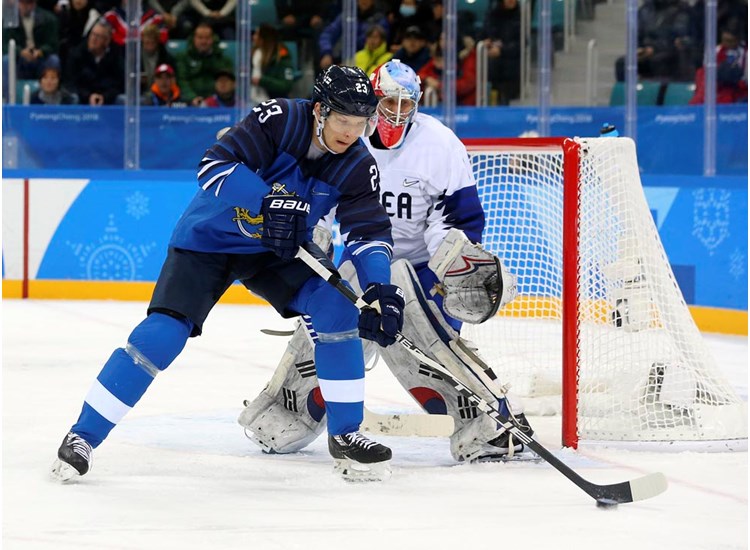 South Korea’s men’s Olympic hockey dream is over after Finland defeated the host country 5-2 on Tuesday evening in PyeongChang.

As expected, it didn’t take much time for Finland to score first. The opening goal of the game came at 4:42 on the power play when Nashville Predators prospect Eeli Tolvanen made a 75-foot backhand pass from the boards to Petri Kontiola, who wasted no time sending a hard shot past Matt Dalton to make it 1-0 for the Finns.

Tolvanen, one of Finland’s best players back at the 2018 World Juniors, continued to prove why he is one of the top players in the tournament. At 3:44 in the second period, he helped Kontiola score his second goal of the tournament after feeding him the puck to the right of the Korean net. Kontiola would shoot the puck towards the net, only to have it bounce off of Korean defender Bryan Young in front, bouncing off his skate and in.

Not to be outdone by his young Finnish counterpart, Miro Heiskanen made it 3-0. Of course, he’d receive a pass from Tolvanen, but he would do a good job of fighting off a Korean defender before rifling the puck over the glove of Dalton, putting Finland up by three.

It looked like Finland was about to run away with the game, but South Korea had completely different plans. At 10:06, following an onslaught of pressure by the Koreans, Canadian-born Brock Radunske found a way to squeak the puck under the right pad of Mikko Koskinen and in to give Korea just their second goal of the Olympics, coming at a time where they needed it most to send the hometown fans into a frenzy.

Finland still looked like the better team, but two minutes later, the Koreans scored again to bring themselves within one goal. This time, Jin-Hui Ahn, who has never really been much of a scoring threat for the Korean national team, scored his first ever Olympic goal after sending one high over Koskinen, putting the Olympic hosts within one past the halfway mark of the game to give them a legitimate shot.

Korea, however, could not improve on their momentum and would fall down to far away to catch back up. For the third time on Tuesday evening, Finland would score on the power play, this time with Jusso Hietanen jamming in the rebound after Oskar Osala touched it seconds prior, giving the Finns the 4-2 advantage. Sakari Manninen would get an empty-netter for FInland in the dying seconds, helping cap off a 5-2 win for Finland.

The Finns will now turn their focus to Team Canada on Wednesday evening at 21:10 local time, a team they’ve had many big battles against over the past few years. For South Korea, the team exceeded anyone’s expectations, standing their own against Canada, Finland and the Czech Republic while playing the top hockey nations for the first time ever at a major tournament.