Czechs Lead Group A After 3-2 Shootout Victory Over Canada

February 17, 2018 / NationalTeamsOfIceHockey / Comments Off on Czechs Lead Group A After 3-2 Shootout Victory Over Canada 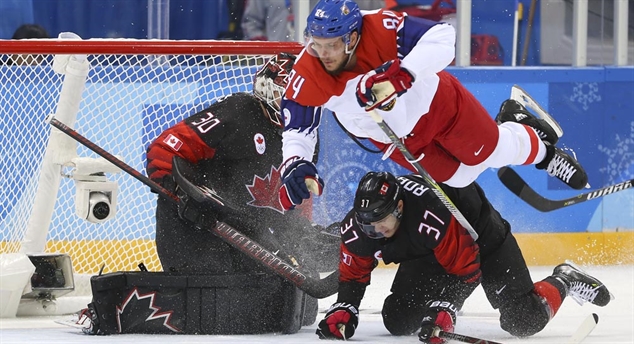 The Czech Republic have taken over the lead in Group A at the 2018 Winter Olympics after defeating Canada 3-2 in the shootout on Saturday.

The Canadians didn’t need much time to score the game’s first goal. At 1:13 on the power play, Mason Raymond tipped in a shot in close off of a Linden Vey feed, beating Pavel Francouz to make it 1-0 off of the first good scoring chance.

But at 6:52, the Czechs tied it up. A poor defensive effort in front of Ben Scrivens, particularly by Chris Lee, allowed Dominik Kubalik to walk in and sneak a shot from a tough angle to knot the game up at one apiece.

Rene Bourque was a long shot for Team Canada heading into the 2017-18 season, but after four periods of play, he made his presence known. At 13:30 on the power play, Bourque picked up his own rebound after some good puck-movement around the Czech zone, resulting in Canada taking their lead back to make it 2-1.

The Czechs needed just 25 seconds in the second stanza to tie it up at two. Former Carolina Hurricanes defenceman Michal Jordan made it 2-2 after sneaking in after Michal Birner last touched the puck in a scramble, beating Scrivens with a high shot to knot the contest up again.

With no scoring in the third period, the Olympics would see the first shootout of the tournament. Wojtek Wolski would score for Canada but it would be back-to-back goals from Petr Koukal and Jan Kovar that would get the job done, giving the Czechs the shootout victory after a similar result against Canada at the 1998 Winter Olympics in Japan.

Canada will complete their round robin action with a Sunday night meeting against the hosts from South Korea, a team they beat 3-2 at the Channel One Cup in December. The Czechs will also finish their action on Sunday, taking on Switzerland earlier in the day.