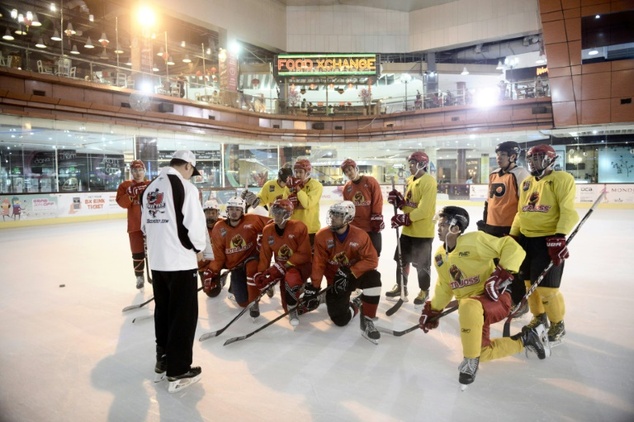 SOUTH TANGERANG, Indonesia: They come from a tropical country better known for palm-fringed beaches and big-wave surfing than winter sports.

But Indonesia’s plucky ice hockey team hopes to defy the odds when they skate into a major international tournament for the first time at the Asian Winter Games in Sapporo next week.

The players are part of the first contingent of Indonesian athletes ever to participate in the games, with the Southeast Asian nation also sending figure skaters and short-track speed skaters to compete in Japan.

For the part-timers in Indonesia’s ice hockey team – whose story has echoes of the Jamaican bobsledders of the 1988 Winter Olympics, whose story was turned into the hit comedy movie “Cool Runnings” – it will be their toughest challenge yet.

“This is the first time ever they’ve played in a real, international competition,” said coach Gary Tan, after a vigorous training session at one of the country’s three rinks, on the outskirts of Jakarta.

Tan, a Malaysian who has been drafted to get the team into shape before the tournament, shouted orders at the players dressed in red and yellow outfits as they skated at high speed, practising tackles and trying to smash the puck into the net.

They huddled on the ice at the end of the session, as Tan gave them pointers.

The rough and tumble of ice hockey is a change for many of the players who are not paid to be on the national team and must earn their living in day jobs ranging from office workers to start-up entrepreneurs.

Indonesia are sending a 23-man squad – 20 players and three goalkeepers – to the Games, many of whom have played in club tournaments abroad.

But they will face more experienced opponents in their group at the Games, which will welcome some 2,300 athletes and supporters from more than 30 countries between February 19-26, including Iran, Malaysia and Macau.

“Obviously we are the underdogs,” conceded team member Felix Utama, a 26-year-old whose day job is in the IT industry.

Even getting a hockey team together to practise regularly is a challenge in Jakarta, a chaotic, sprawling metropolis whose sprawl takes in some 28 million people.

The players need to travel up to two hours through the city’s notorious gridlock to get to the rink in South Tangerang, a commuter city outside the capital. Most only make it to half of the practice sessions.

Ice hockey is an unlikely sport for anyone to play in the sprawling archipelago, which lies in the tropics and where the mercury rarely drops below 25 Celsius (77 Fahrenheit).

Tan said a major challenge for promoting ice hockey in Indonesia was that the sport was not ingrained in the national culture like it is in colder countries.

“The biggest thing is the mindset, the culture,” he said.

“If you are brought up in a hockey culture, a winter country, then it is completely different because everybody eats and sleeps hockey.”

Nevertheless, the fast-paced sport has won a small but dedicated following as a more exciting alternative to disciplines where the country has traditionally done well internationally, such as badminton and weightlifting.

Tan hopes the upcoming tournament can prepare the players for a more modest goal: the smaller Southeast Asian Games in Malaysia in August.

But the Indonesian government is more ambitious, and envisages one day sending an ice hockey team to the Olympics.

“If they perform very well, probably we would like to take part in the next Winter Olympic Games,” said sports ministry spokesman Gatot Dewa Broto.

And while the chances of a giant-killing seem remote, Indonesia’s players believe they have a chance of pulling off a surprise in Japan.

“We are going to show you what we’ve got,” said assistant coach Andianto Hie, 30, in a message to those who may doubt his team’s ability.

From sand beach to frozen lake, meet the guys of the Cayman Islands pond hockey team