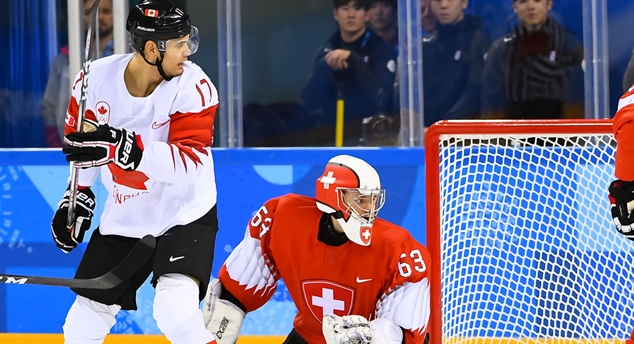 Canada began its Olympic defence with an assured 5-1 victory over Switzerland – and introduced a batch of new names to its illustrious history at the Games. Rene Borque and Wojtek Wolski scored two goals apiece, while Derek Roy had a hat-trick of assists to mark their Olympic debuts.

Deprived of its NHL stars, the current Canadian roster has an rather unfamiliar look. Drawn largely from European-based players, it’s a team that combines NHL veterans approaching the end of their careers with players who tired of life on the bubble and gambled on a fresh start in new surroundings. Head coach Willie Desjardins did not exactly bang the drum at his team’s final practice, suggesting that Canada might have to “score by committee” in this competition.

Chris Lee, a D-man who never made the NHL, explained how the new-look Canada is coming together as a team.

“We have a lot of emotion in the room, and we’re playing for each other and for the emblem,” said the Metallurg Magnitogorsk blueliner. “It doesn’t matter who scores the goals. We’re all going to chip in with a blocked shot or a goal or a hit. It’s fun to see that emotion.”

However, if it’s going to take a committee to get goals for this team, Bourque made an impressive bid to be the executive at the head of the working party. Less than three minutes into the game, he rolled up to the doorstep in time to apply the finishing touch to a Chris Lee pass from the point and send the puck behind Leonardi Genoni in the Swiss net.

Bourque is a player typical of the NHL-free Canada roster. Undrafted, his career has been a tale of trades and debates rather than trophies and celebrity. Along the way, he’s struggled with injuries – including a horrific neck injury when inadvertently slashed by a skate during a scrummage in the crease while playing for the Blackhawks in 2006 – and faced accusations of failing to make the most of his talent. Highlights included a call-up to Canada’s 2010 World Championship roster and a time when he was viewed as the answer to Calgary’s scoring needs. A summer move to Djurgardens in the Swedish Championship paused an NHL career with 725 appearances, and opened the door for an Olympic call-up.

And he had a role in Canada’s second, which arrived in the eighth minute on the team’s first power play of the night. Maxim Noreau met Chris Lee’s feed with a devastating one-timer from the point; Bourque threw up the screen for the SC Bern defenceman to score on his club colleague Genoni.

Another man who characterises the unlikely Canadian line-up is defenceman Chay Genoway. In the KHL, his Lada Togliatti team is well out of playoff contention, but tonight he was making his Olympic debut. Not surprisingly, he was fully motivated. “It didn’t take much to get up for this game,” he said. “It’s been a long time coming. We’ve been thinking about this for a while. It was fun to get out there and burn some energy.”

Switzerland sought to recover from those blows, but struggled to generate offence in the first period. And the game was effectively ripped from Swiss hands in the 26th minute when Canada scored twice in quick succession. Bourque made it 3-0, a lovely touch and backhand finish as he got right in front of Genoni to convert Derek Roy’s pass with some style. That had Canada two from two on the power play – another area Desjardins had identified as mission critical – and in control.

Then came Wolski, crowning his incredible recovery from a broken neck with a goal on his Olympic debut. As a Swiss attack broke down, Wojtek streaked onto Noreau’s pass down the right channel, danced his way past Simon Moser and Fabrice Herzog, and fired an early shot past a startled Genoni. That was the last action of the night for the goalie; Jonas Hiller was called from the bench to replace him and was almost beaten by Roy almost immediately when the Linkoping forward shot over an empty net.

It was an emotional moment for Wolski, whose life was turned upside down after a freak accident playing for Metallurg Magnitogorsk in the KHL in 2016 left him with a broken neck and potentially paralyzed. “There were a lot of ups and downs,” he said. “I’m so grateful for how it worked out, for being here. I’m so happy I can experience this but it wasn’t easy. There were times when I didn’t think I’d be able to walk again, be able to play hockey, to lead a normal life. It’s pretty special to be here.”

In the face of the Canadian offence, the Swiss struggled to find a way into the game. A couple of early wobbles from goalie Ben Scrivens offered Switzerland some hope, but the Salavat Yulaev Ufa man survived those anxious moments and grew into his game. There were flashes of encouragement for the Europeans – lovely hands from Andres Ambuhl created a presentable second-period chance for Eric Blum – but it wasn’t until the last minute of the second period that Scrivens saw any sustained pressure in front of his net.

Moser felt that his team’s improvement in the closing stages was partly due to Canada putting the result beyond doubt, but still saw some positives from the way Switzerland finished the game.

“They didn’t have to play their hard game anymore. They just had to focus on defence and that gave us time with the puck,” he said. “If we manage the puck better and believe in our skills, I think we can play the game better.”

The final frame saw Switzerland get a great chance to score its first goal of the Games during a 5-on-3 power play eight minutes into the session. Denis Hollenstein dinged the post, Scrivens survived a breakdown in communication in front of his crease, but Moser finally forced the puck into the net when he stuffed home the loose puck after Thomas Rufenacht’s shot squeezed through the goalie’s defences.

That goal came with Hiller on the bench, sacrificed for an extra attacker during the power play. But when Switzerland repeated that gamble at even strength with almost six minutes to play, the plan backfired. Wolski cashed in to fire his second of the night into the empty net after the Swiss turned over possession in the Canadian zone.

It wrapped up a satisfying night for Canada, but Wolski warned there could be more to come. “We’re happy with how we played, we’re happy we won but we have to forget about it,” he said. “We’ll celebrate a little bit after the game, cherish the moment, but tomorrow we’ll look at the video, see where the mistakes were and see where we can build.”

From the Land of Canaan to Canada, Israel’s first hockey star shoots for NHL