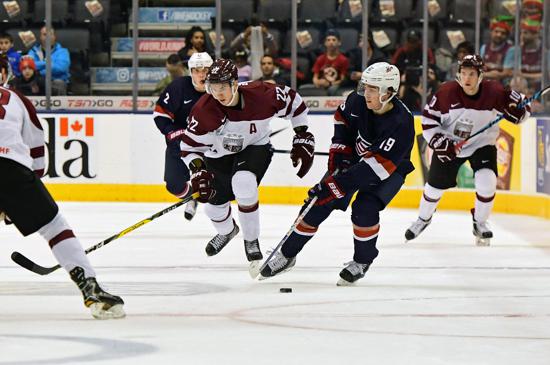 Team USA wasn’t perfect, but in a tournament opener against an inexperienced Latvian team, it played well enough to earn a 6-1 win at the Air Canada Centre.

Two goals in the middle period broke a 1-1 tie to ensure the victory. Clayton Keller had two goals for the Americans, who limited Latvia to just 12 shots on goal.

“We take every game and team seriously,” said assistant captain Colin White, who had a goal and an assist. “We had a few days off before this game, so it took us a bit of time to get our legs going. Overall, there were a lot of positives we can take for the next game.”

This marked Latvia’s first U20 game at the top level since 2013. It won Division I-A last year to earn the promotion and looked every bit the second-best team this afternoon. Nonetheless, it also showed pluck and determination against an American team that was much faster and more skilled with the puck.

The U.S. showed plenty of skill but also took some uncharacteristic penalties and allowed some odd-man rushes that might have been more costly against a top-six nation. Still, as the game went on, it played better and better.

“We don’t want to take so many penalties, of course,” White added, “but at the same time, we have a great penalty kill, so we’re confident.”

The Americans opened the scoring at 6:27 of the first on a routine shot by Patrick Harper from the slot. His shot fooled Mareks Mitens in the Latvian goal and staked the U.S. to an early lead.

Latvia was outclassed the first half of the period and didn’t get its first shot until near the ten-minute mark. It wasn’t until four minutes later it got another shot, but that one counted.

A loose puck squirted up the middle of the ice where Renars Krastenbergs, celebrating his 18th birthday, chased it down. He went in alone on Tyler Parsons and made a nice deke at 15:22 to tie the score and bring most of the crowd to its feet.

“Those cheers helped us a lot,” said Mitens. “It was such an amazing feeling when everyone got behind us.”

“I looked behind me to see how much time I had, and I saw the goalie back up a bit, so I made a move and it worked,” Krastenbergs said.

Interestingly, whereas the Latvians took the first half of the period to register a shot, the Americans were without one for all of the second half of the opening 20.

The U.S. took a 2-1 lead at 6:29 of the middle period. After allowing several odd-man rushes to their opponents, they went ahead on a nice pass by Tage Thompson to Colin White on a two-on-two rush. White finished the play by roofing a shot over Mitens’s glove from in close.

The Latvians had a great chance to tie the score with a two-man advantage for 1:24, but the U.S. penalty kill didn’t even allow so much as a shot on goal.

“Whenever you have something good like that happen, you get a lot of momentum,” White suggested. “That kill really got us going.”

Indeed, after a lengthy period of sustained pressure, Clayton Keller made it 3-1 with only 1:15 remaining in the middle period, putting the game out of reach.

Keller added his second at 12:19 of the third on a screen shot from the slot, and Jeremy Bracco found a hole between the pads of Mitens late in the game to make it 5-1. Jordan Greenaway closed out the scoring with 39.9 seconds remaining.

The U.S. has tomorrow off while the Latvians play Russia in the afternoon.

Day One Recap of the Spengler Cup