Why Jack Hughes is the No. 1-ranked 2019 NHL draft prospect

June 26, 2018 / NationalTeamsOfIceHockey / Comments Off on Why Jack Hughes is the No. 1-ranked 2019 NHL draft prospect 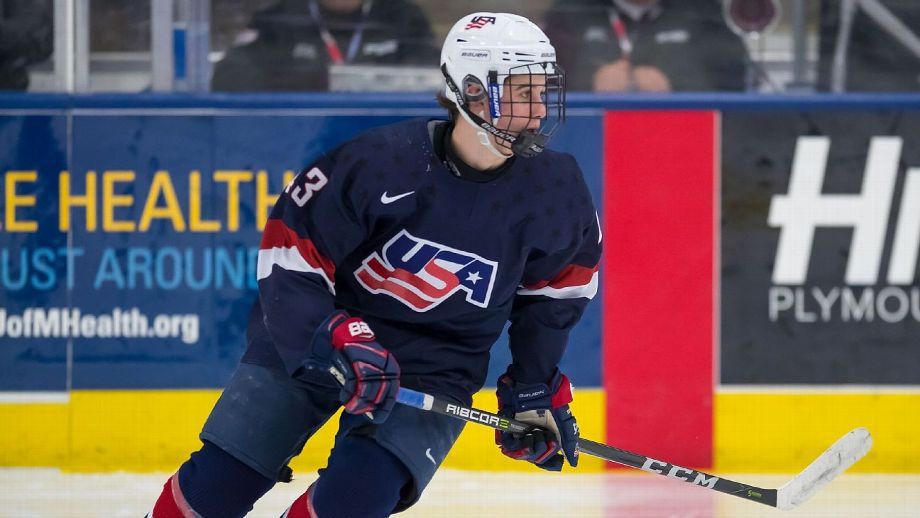 The 2019 NHL draft is shaping up to be as exciting as this year’s, at least at the top of the draft. The hockey world is already salivating over 17-year-old American phenom Jack Hughes after his jaw-dropping performance in leading Team USA to the title at the World Under-17 Hockey Challenge in November. Since then, he has been lighting up scoreboards and generating headlines across the world for his superior skill and skating.

Part of a family with deep roots in the game, with both parents playing at a reasonably high level and a pair of brothers who make for great training partners and competitors, Hughes has been preparing for this moment his whole life. After Jim and Ellen Hughes’ eldest son, Quinn Hughes, went No. 7 overall to the Vancouver Canucks on Friday, the spotlight will begin shining more brightly on their middle son.

“He has the most pure skill of any player I’ve seen for 2019,” one Western Conference scout said of Jack Hughes.

The skill and skating abilities Hughes possesses have been a big reason that his size comes up so much later in the conversation with scouts. Should Hughes go No. 1, he would be the smallest top pick since Patrick Kane was selected in 2007. Hughes was most recently listed at 5-foot-10, 161 pounds. Kane was listed at 5-10, 171 pounds in his draft profile. There’s no doubt Hughes needs to bulk up a bit, but there are a lot of reasons the size factor will be a minimal one come draft day next summer.

Hughes’ 16-year-old season is essentially unprecedented for an American player. At USA Hockey’s National Team Development Program, he put up 116 points — just one point shy of Auston Matthews‘ program record. The big difference is Matthews did it when he was a year older. The previous high-water mark for a U17 player at the NTDP was 82 points set by Phil Kessel and Clayton Keller. That’s a 34-point difference from what Hughes did. Last I checked, both of those guys are pretty good NHL players.

Looking back through the years, there just haven’t been that many American teenagers who have had a season this astonishing from a production standpoint this young at a level this high. For reference, Mike Modano, the second American to go No. 1 overall, had 62 points in 70 games in his first WHL season at 16, and that was in 1987. Kane, at the same age at the NTDP, had 70 points in 63 games, but 40 of those contests were in the North American Hockey League, a Tier II Junior A league in the United States. Hughes appeared in 27 games in the Tier I USHL this season and spent half the season playing up with the U.S. national U18 team in the USHL, against colleges and U18 international teams.

To find recent, closer comparables to what Hughes did this season, the U17 OHL seasons of Connor McDavid (99 points in 56 games) and Steven Stamkos (92 points in 63 games) might be good starting points.

One of the more incredible stats from his 2017-18 season is that Hughes had 54 points against USHL competition, averaging two points per game. He led all USHL rookies and ranked 12th in league scoring despite playing only 27 games of a 60-game season.

Even more jaw-dropping, among U17 players who appeared in at least 20 games in the USHL’s long history, none averaged better than 1.45 points per game. This year’s No. 2 pick, Andrei Svechnikov, averaged 1.21 points per game in 48 games vs. the USHL in 2016-17. Matthews averaged one point per game in 20 USHL appearances as a U17. This league is traditionally difficult to score in, and Hughes obliterated it as a 16-year-old.

The Orlando-born forward also led two major international tournaments in scoring this year. He had 15 points in six games as the U.S. won the World U-17 Hockey Challenge, a tournament that boasts many of the NHL’s top players as alumni. Only Colin White, an Ottawa Senators first-rounder, had more points than Hughes in that tournament’s history. Some guy named Ilya Kovalchuk ranks third behind Hughes. Then he closed out his season with 12 points in seven games at the IIHF World Men’s U18 Championship, becoming the first under-ager to lead that tournament in scoring since 15-year-old McDavid did it in 2013.

Hughes is expected to return to the national team development program next season despite overtures from the Ontario Hockey League and flirtation with accelerating his schooling to attend college a year early, a la Noah Hanifin and Zach Werenski. No player has gone directly from the NTDP to the NHL, but Hughes will probably have a chance at becoming the first. Each of the past four Americans selected first overall in the NHL draft — Rick DiPietro, Erik Johnson, Kane and Matthews — each played at the NTDP for two seasons before going on to college, junior or pro. Hughes will be part of a team many scouts consider one of the best the NTDP has ever produced, which is really saying something given that program’s star-studded alumni roll. There could be as many as six or seven first-round picks off of that team in 2019.

John Wroblewski, head coach of the team featuring most of the top Americans from the 2001 birth year, noted that having so many high-caliber players has created excellent competition in practices on top of the advanced competition the team plays throughout its season. So what has Wroblewski noticed as a separating factor for one of his prized pupils?

“When you’re at ice level and you watch his glide — compared to everyone else, he’s just moving so much faster,” Wroblewski said. “The game slows down in his mind.”

As the game continues to speed up, Hughes looks built for that brand of hockey. He will be scrutinized like all top picks are. He’ll have some competition along the way, perhaps even from some of his own NTDP teammates. But based on what we saw this season, considering the lack of precedent for what Hughes accomplished, it appears the next great American star has arrived.