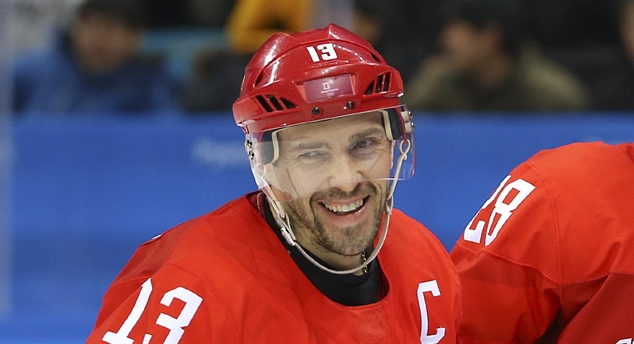 Datsyuk won the Stanley Cup with the Detroit Red Wings in 2002 and 2008, and he won World Championship gold with Russia in 2012. And now he won Olympic gold with the Olympic Athletes from Russia in an overtime win in the final against Germany.

“I’ve not even thought about the Triple Gold Club yet,” he said after the game. “But when it sinks in, I guess I’ll need a new dream to shoot for because all my dreams have come true.”

Russia had six previous TGC members, including Valeri Kamenski, Alexei Gusarov, Vyacheslav Fetisov, Igor Larionov, Alexander Mogilny, and Vladimir Malahkov. Datsyuk is the first Russian to join since Malakhov & Mogilny in 2000 after winning the Cup with the Dallas Stars.

For the first time since the Unified Team of Russian athletes won the gold medal at the 1992 Olympics, the Olympic Athletes of Russia have won gold at the 2018 Olympics after an instant classic against Germany, a 4-3 overtime victory.

Germany did a great job of holding on in the first period given the obvious skill level between the more physical, grinding German team and the fast, star-studded Russian squad. Danny Aus den Birken was the king of the night, making 12 saves in the opening period, including two big pad stops on Kirill Kaprizov and Pavel Datsyuk.

But the Germans felt heartbreak with just 0.5 seconds left in the opening period. Nikita Gusev would find former Los Angeles Kings defenceman Slava Voynov a few feet in from the blue line, with Voynov unleashing a hard shot past Aus den Birken to make it 1-0 Russia.

The Germans couldn’t compete with Russia in the skill department, so they’d need to do anything they could to grind out a goal like they had been able to do all tournament long. At 29:32, that’s exactly what they did after Felix Schutz got a weak backhand through the blocker arm of Vasili Koshechkin and in, tying the game at one just before the halfway point of the game.

As if the pressure wasn’t already against Germany, no team had ever lost their first two round-robin games at the Olympics and gone on to win gold. So when Russia scored at 13:21 in the third period to put the pre-tournament favourites back in front, the Germans would need a bit of luck. Gusev would get his second point of the night after forcing Aus den Birken to flinch with a shot near the goalie’s head, putting Russia up by one with time running out.

But 10 seconds later, the Germans knotted it up at two. Dominik Kahun, a former OHL star with the Sudbury Wolves, scored on the one-timer in front of the net after Frank Mauer found him in front, with the young German hockey star giving the underdog nation a chance late in the game.

Russia looked so overpowered heading into the tournament, but that didn’t matter on Sunday. With three minutes to go, Jonas Muller scored the biggest goal in German hockey history when he scored on a hard shot in the high slot, beating Koschechkin to make it 3-2 and put the Germans in the lead. It was Muller’s first ever Olympic point, and after sitting out a game early in the tournament, it was the most important goal Germany had ever scored.

But with 55 seconds left, Gusev, Russia’s best player in the medal round, tied the game up at three. He scored from a nearly impossible angle just a few feet away from the net, somehow beating Aus den Birken while Russia had their net empty to make it 3-3, sending the game to overtime.

One of the greatest games in Olympic history required extra playing time to decide the winner, with both nations looking to get their first gold medal in their current forms. Russia was close with 13 minutes left in OT when Kovalchuk broke in all alone, making a quick deke on Aus den Birken. Kovalchuk thought he beat Aus den Birken on the play, but the German netminder made an incredible left pad save to keep the puck out and keep his team in the game.

Kirill Kaprizov, Russia’s star player at the World Juniors a year ago, would get the job done in overtime. Gusev would grab his fourth point of the night after feeding Kaprizov to the left of the German net, one-timing a hard shot to give the Olympic Athletes of Russia the gold medal, the first time a Russian team has done so since the fall of the Soviet Union.