April 16, 2017 / NationalTeamsOfIceHockey / Comments Off on SKA Wins The Gagarin Cup 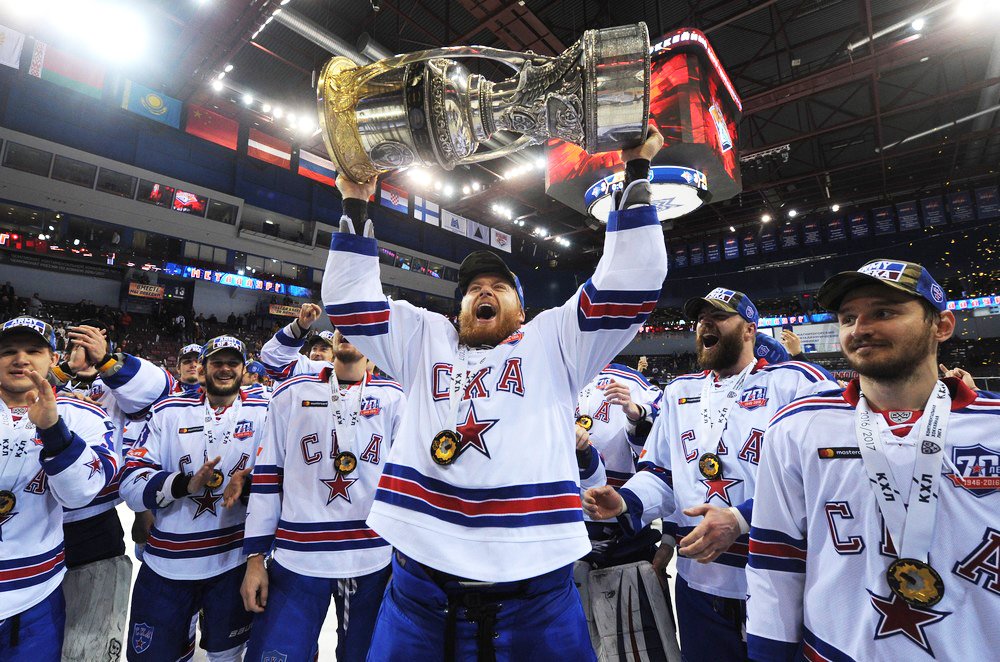 SKA St. Petersburg wrapped up its second Gagarin Cup triumph in three seasons with a battling victory in game five in Magnitogorsk.

Oleg Znarok’s team displayed the hallmarks of a true champion, battling back from 0-2 to wrest control of the game and complete the series in five. In contrast with SKA’s previous Gagarin Cup triumph in 2015, when the team went to Kazan and overwhelmed Ak Bars with a devastating first-period performance, this game was all about patience, belief and finding a way to retrieve a difficult situation.

Metallurg, knowing that only victory would prolong its defense of the title it won last season, produced a start that got the home fans believing that their hopes could be resurrected this Easter Sunday. In the third minute, Alexei Bereglazov’s shot was tipped beyond Mikko Koskinen by Sergei Mozyakin; only the post saved SKA. In the ninth minute, though, Oskar Osala would not be denied. He raced onto Tommi Santala’s pass, got away from Alexander Barabanov and shot from the face-off spot to beat Koskinen over the glove for a goal reminiscent of his marker in Metallurg’s 2-3 loss in Petersburg on Friday.

That was the only goal of the first period, but Viktor Antipin doubled the home lead early in the second when his shot from the left took a deflection off Yegor Rykov’s skate and beat Koskinen. In a series where two-goal leads have been scarce, Metallurg was looking good to win the game and take the action back to Petersburg.

The momentum changed fast. A penalty on Danis Zaripov saw SKA quickly convert its power play chance: Evgeny Dadonov rushed down the right, played the puck back into the center from the goalline and found Nikita Gusev perfectly placed to fire home a one-timer from between the hashmarks.

The fans who came to the game in referees’ uniforms with a SKA logo replacing the KHL’s crest would, no doubt, have continued to protest the perceived injustice of Zaripov’s latest penalty call. SKA, meanwhile, was inspired and went on to tie the game two minutes later. Alexander Barabanov got the goal, but it was all about Ilya Kovalchuk’s pass from behind the net. SKA’s captain picked up on a broken play in Metallurg’s zone and set off around the boards, but opted to pass early from the near post when he spotted Barabanov peeling into space right in front of Vasily Koshechkin’s net.

Suddenly, the pattern of the game was transformed. Metallurg, having built itself a winning position, had to start afresh. SKA, facing a trip back to Petersburg, now saw its way clear to winning the cup on the night.

That pathway become even wider for the visitor in the 35th minute when Dadonov converted a two-on-two rush. Gusev fed Vadim Shipachyov, who brought the puck smoothly through center ice. Metallurg’s covering defensemen were caught out, unsure whether to block the shot or the pass, and ultimately failed to do either as Shipachyov’s perfectly-weighted pass picked out Dadonov for a one-timer that Koshechkin could do nothing with. Three goals in seven-and-a-half minutes had transformed the destiny of the game and the series.

Kovalchuk made it 4-2 just nine seconds into the final stanza. Patrik Hersley intercepted a pass out of Metallurg’s zone, advanced into an attacking position and fed Kovy for an emphatic finish. But Magnitka, rocked, was not done. Yaroslav Kosov made it 3-4 within a minute, collecting a loose puck after Artyom Zub collided with a linesman and advancing to find the bottom corner under pressure from Andrei Zubarev.

The final period was anxious; Metallurg fought hard, piling up the pressure and finishing with a 20-3 advantage on the shot count. But Koskinen was in unbeatable form, and kept his best save until last. With less than two minutes left, and Magnitka using six skaters, a rebound dropped for Osala on the slot. The Finn’s shot drew an instinctive reaction stop from his compatriot, and the puck rolled agonizingly alone the goal line before bouncing to safety off the post.

That proved to be the last chance. Two time-outs later, SKA resumed, won a face-off at its own net and got the puck clear for Sergei Plotnikov to score an empty-netter. Koskinen still needed to complete his 42nd save of the night and deny Zaripov, but the 2017 Gagarin Cup had found its home.

SKA’s victory means that the Petersburg club is the fourth to lift the Gagarin Cup twice, joining Metallurg Magnitogorsk, Ak Bars and Dynamo Moscow. Head coach Znarok becomes the first coach to win it three times, having twice claimed the top prize in the capital. The 4-1 margin in the final series matches the best ever, twice achieved by Vyacheslav Bykov as head coach of Salavat Yulaev (2011) and SKA (2015). Like Bykov, Znarok has also now won the cup while combining his club duties with taking charge of Team Russia.