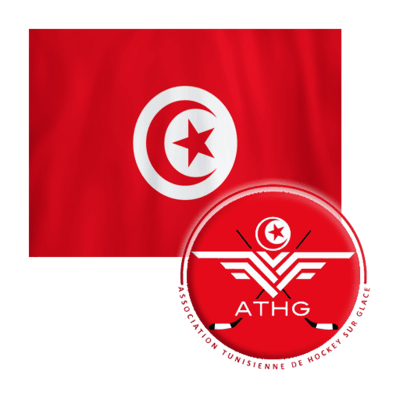 But even with that, they still managed to win their very first hockey tournament, a rare occurrence for any team.

The Tunisian hockey dream had a slow start, but the dream would still become a reality. After hard work from French Division IIII player Ihab Eyad, the Tunisian Ice Hockey Federation was finally announced on November 11th, 2009. The future was sill unclear at that point, with rumors of the team participating in a potential African Ice Hockey Cup in 2010, which never actually came to life.

Their first game was a memorable one, even though it ended in disappointment. Featuring a full 23-man squad, the team battled it out against Les Coqs de Courbevoie, a team that participates in the fourth highest French league. Tunisia put in a good effort but despite that, they still managed to fall short in a 6-5 loss on June 14th, 2014.

Tunisia’s roster wasn’t great. They were without some of their better players, including former NHLer Ramizi Abid and Semir Ben Amor. Very few players play highly competitive leagues, with Adrien Sebag potentially being one of the best playing in the ACHA III league, which, for those that don’t know, is below the NCAA.

They didn’t win, but they were just getting started.

After years of planning, the first ever African Ice Hockey Championships took place in Morocco during July of 2016. The sport had really never developed in the content, with South Africa competing in the lowest division of the World Championships, Division III. As the 42nd highest ranked team in the IIHF rankings out of 50, of whom 47 actually play, it’s not really a thriving market.

That’s what the African Cup was ready to help. For the teams in attendance, it was the first real effort at playing hockey in many years. For Algeria and Morocco, it was their first tournament since the 2008 Arab Cup, an event that never happened again. For Egypt, it was the first time they had entered any team in an international tournament.

With Tunisia playing just two years prior, it could be said that they were ready for the task after playing most recently out of any of the competitors. Featuring most of the players that participated in the game in 2014, Tunisia was ready to combat for a victory.

There weren’t many fans in attendance. Major news outlets weren’t talking about it. TSN wasn’t producing daily segment recaps showing you all the greatest moments from the opening 19-0 victory for the Carthage Eagles, Tunisia’s club team.The Eagles followed it up with an 11-6 victory over Algiers Corsaires from Algeria before defeating the Morocco Mallers 11-8.

That set the pace for the final game, which saw the only two unbeaten teams battling it out for gold. In the end, Carthage would score the extra goal needed to take the victory, finishing off the tournament with a perfect record for Tunisia’s first championship in an international competition, whether it be with the national team or a club team, at the men’s level.

Tunisia could now claim to be ice hockey champions, even if it was at a level that wouldn’t be considered competitive in North America.

Hope for a Good Future

Their victory was a major step in the right direction for Tunisia’s future. Yes, it wasn’t an official international tournament, despite the countries essentially using their national team players. But to beat your closest competition despite being an extremely new program is something to be proud of.

But that’s to be expected for a team such as Tunisia. The sport is fairly new there and there isn’t a lot of money available to the teams. Developing at the grassroots level is something Tunisia has been working towards, but it’s tough when your only chances to play come at random points. Still, this team is dedicated to building a strong future in the sport and have aspirations of playing at a much higher level some day.

With Ihab Eyad putting his faith into such a program, you can bet yourself that they’ll rise to be much stronger someday.